This interesting development of the grade II listed building which formerly housed Ferndale Prep School from 1952 until it’s closure in 2016 was completed and roofed by Bicester Roofing using our ‘Merayo’.  Ferndale private school opened in 1952 with 6 pupils in Dunraven House, London St, Faringdon which is in Oxfordshire. The schoolroom contained just 3 tables, 6 chairs, and a teacher’s table.

After 2 terms, the school had grown and moved to Chieveley House in Gloucester St. By 1956 there were 36 pupils before the school moved to Bromsgrove.  By 1979 there were 135 pupils.  The school provided an intimate and friendly atmosphere with a philosophy of developing each individual pupil’s potential. The children came from Swindon, Lechlade, Highworth, Buckland, Longworth as well as Faringdon. Parents were attracted by the insistence of courtesy, consideration for others, and good mannered behaviour all nurtured within a strongly Christian ethos.

The school earned a reputation for charity work, raising hundreds of pounds for the Victoria Home in Poole, where it supported a named cot.

Ede Homes of Witney in Oxfordshire successfully applied to convert this one of a kind listed building boasting an abundance of charm and character. The unique restoration project brings back to life an 18th-century grade II listed building.

Ede Homes meticulously and sympathetically transformed the former Ferndale school converting the buildings into ten houses. The main building on the site on Bromsgrove is to be converted into eight flats, while the demolition of the old dining hall will make way for two new houses.

Nigel Admas, Contracts Director for Bicester Roofing explains that the difficulty with this project was that there were lots of different roof pitches with some elevations as low as 22.5 degrees, a standard 500mm x 250mm slate will only work down to 30 degrees (severe location) so couldn’t be used throughout.  However, the Merayo Spanish slate from ESCO, a slate we have used for many years is stocked in a whole range of sizes so we were able to use the 500mm x 250mm on the main roof and the 500mm x 300mm on the 22.5 degree lower pitched roofs at a 128mm headlap. This versatility helped us keep a uniformed aesthetically pleasing finish in keeping with the new chapter of this historical building. 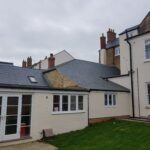 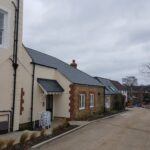 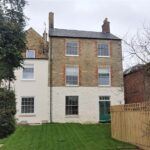